The Apostle of the Devotion to the Sacred Heart of Jesus 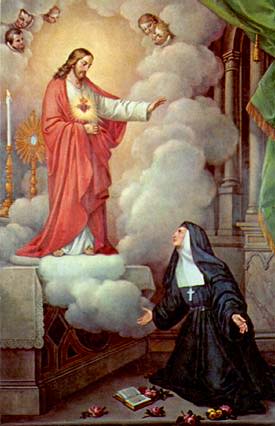 Saint Margaret Mary was born at L’Hautecour, Burgundy, France, on July 22, 1647 to Claude Alacoque and Philiberte Lamyn. Her father died when she was about eight years old, leaving her family in a precarious financial situation and at the mercy of some rapacious relatives. As a young girl, she was stricken with rheumatic fever, and the resulting paralysis forced her to be bedridden for the next four years until the age of fifteen. It was during this time that she developed an intense devotion to the Blessed Sacrament and made a vow to the Blessed Virgin to consecrate herself to religious life. During these hard times Margaret continued her devotion to the Blessed Sacrament and Christ made His presence known to her. She later wrote, “At that time, all my desire was to seek happiness and comfort in the Blessed Sacrament.”

She had three more visions over the next year and a half in which Jesus instructed her in a devotion that was to become known as the Nine Fridays. Christ also inspired Margaret Mary to establish the Holy Hour and to receive Holy Communion on the first Friday of every month. In the final revelation, the Lord asked that a feast of reparation be instituted for the Friday after the octave of Corpus Christi.
On May 25, 1671, at the age of 23, Margaret entered the Order of the Visitation convent at Paray-le-Monial. She pronounced her final vows on November 6, 1672 and took the name Mary. During her retreat before her profession, she had a vision of Jesus in which He said, “Behold the wound in my side, wherein you are to make your abode, now and forever.” The Lord continued to appear to her in visions and on December 27, 1673, the feast of Saint John the Evangelist, as she knelt at the grill before the exposed Blessed Sacrament, she experienced a vision in which the Lord told her to take the place that Saint John had occupied at the Last Supper, and that she would act as His instrument. Jesus revealed His Sacred Heart as a symbol of His love for mankind, saying, “My divine Heart is so inflamed with love for mankind … that it can no longer contain within itself the flames of its burning charity and must spread them abroad by your means.” She described that His Heart was on fire and surrounded by a crown of thorns. Our Lord told her that the flames represented His love for humanity, and the thorns represented man’s sinfulness and ingratitude. Jesus informed her that her mission was to establish the devotion to His Most Sacred Heart, and He revealed twelve promises that He would bestow upon all those who practice the devotion.

Blessed Claude de la Colombiere, a holy and experienced Jesuit, arrived as confessor to the nuns, and in him Margaret Mary recognized the understanding guide that had been promised to her in the visions. He became convinced that her experiences were genuine and adopted the teaching of the Sacred Heart that the visions had communicated to her. Her revelations were made known to the community when they were read aloud in the refectory from a book written by Blessed Claude. Her revelations in the open, she encouraged devotion to the Sacred Heart, especially among her novices, who observed the feast in 1685. A chapel was built in 1687 at Paray in honor of the Sacred Heart, and devotion began to spread in other convents of the Visitidines, as well as throughout France.

Margaret Mary became ill and died on October 17, 1690 during the fourth anointing step of the last rites. As she received the Last Sacrament, she said, “I need nothing but God, and to lose myself in the heart of Jesus.”

The devotion to the Sacred Heart of Jesus was officially recognized and approved by Pope Clement XIII in 1765, seventy-five years after her death. Margaret Mary was declared Venerable in March, 1824 by Pope Leo XII, and she was pronounced Blessed on September 18, 1864 by Pope Pius IX. The inauguration of the Feast of the Sacred Heart of Jesus occurred in 1856, and Margaret Mary was canonized by Benedict XV in 1920.