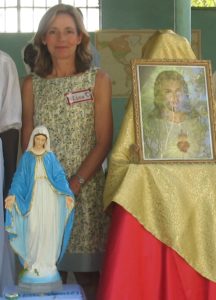 By the grace of God, she has also been able to organize and lead Enthronement missions to Haiti, Kenya, Uganda, Tanzania, Canada and cities throughout the United States.

Lisa is very active in the Pro-Life movement. She has been a speaker at various conferences both in the U.S. and Africa bringing the light of truth about the devastating effects and the heartache of abortion.

Since the fall of 2007, she has played a major role in the 40 Days for Life campaign in Knoxville, TN as the Co-Director, bringing the community together to fast and pray in front of the local abortion clinic. She is also currently Regional Coordinator for the state of Tennessee, for the Silent-No-More Awareness Campaign. She served as the Coordinator for the Freedom Ride in Knoxville with Dr. Alveda King, Father Frank Pavone, and other pro-life leaders from across the country several years ago. In the past, Lisa coordinated the Silent Prayer Chain in Knoxville and she was involved in the planning for the Procession of Healing as well. She has served on the board of Chattanoogans for Life and has attended the March for Life in Washington, D.C. for many years.

She served for six years on the Sacred Heart Cathedral Parish Council as Co-Chair of the Social Actions Committee. Lisa taught CCD for 15 years preparing second graders to receive the sacraments of Reconciliation and First Holy Communion. She has been active in Ladies of Charity for the past 25 years, serving first as Membership Chair and as the President for 3 different terms over the past 20 years. Throughout the past 14 years she has served in various capacities on Cursillo weekends, several times as a member of the team giving witness talks and as well as serving as the Rectora and Assistant Rectora.

Prior to her time with the volunteer activities of the last 26 years, Lisa worked for Delta Airlines for over 20 years. She began her career with Delta in 1974 as a Reservationist where she remained for 4 years. She became a Flight Attendant and for over 16 years she flew domestic and international routes including Germany, England, France, Switzerland, Italy and Ireland to name a few. On her off time she traveled all over the world on organized trips as well as on her own to countries such as India, Africa, Australia, Ireland, and Japan.

Her love of travel took on a new look after her involvement in the church and she was blessed to travel on pilgrimages to the Holy Land, the Marian Shrines in France and Pope John Paul s II native homeland of Poland. This led to an amazing new career as a Sales Associate and Group Pilgrimage Coordinator for Select International Tours organizing and leading pilgrimages, most recently to Italy, Ireland, Spain, Russia, Mexico and the Holy Land as well as local pilgrimages to EWTN and anywhere God calls her.

Now that her children are out in the working world she has long wanted to share her love of travel and past experience of the travel industry, coupled with love of the Church and God to help lead people to grow in their faith journey and serve the Lord and His Church and this new chapter in her life is a gift straight from above.

With all of Lisa s involvement in the Church and in the community, she knows it is the power of the Rosary, the Sacraments and the intercession of Mother Mary that all of these works are accomplished to further the Kingdom of God all for His glory and honor.