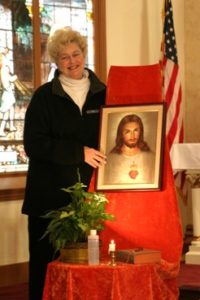 The former Bishop Joseph O’Keefe of the Diocese of Syracuse, New York, blessed and encouraged the operation of the Sacred Heart Center, which was the home base of operations for Gloria’s national ministry. For the entirety of the ministry, beginning in 1974, she has been supported by all her bishops.

Catechesis/Workshops
After missions, missionaries are trained and formed to evangelize through the
enthronement
– Regional workshop for parishes of the diocese of Cincinnati, OH
– Atlanta Diocese Catechesis Resulted in 30 parishes embracing this work